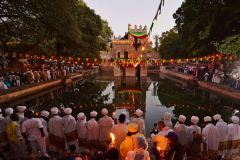 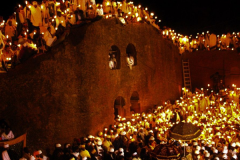 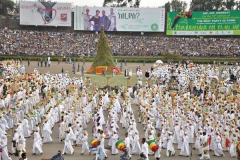 This is the most colorful event in the year when churches parade their Tabots to a nearby body of water.

This is the commemoration of Christ’s baptism, which falls on the 19th of January. The Tabot is taken out in the afternoon on the eve of epiphany and stays overnight with the priests and faithful congregation. The following morning the water is blessed and splashed over everyone in a ceremony where the faithful renew their vows to the church. If the body of water is large enough, some people will immerse themselves. Women who have been unable to have children participate in the ritual for fertility. After the ceremony, the Tabot is paraded back to its Church accompanied by much singing and dancing.

This is a festival that follows a fasting period of 55 days. During this time, no animal product is eaten and the faithful do not eat anything at all until the daily service is finished at around 3:00 P.M.
The fasting period culminates on the last two and half days long fasting ritual.

This is celebrated on the 11th of September. Various Ethiopian peoples have their own new years and respective celebrations.

This is celebrated in memory of the Finding of the True Cross by Empress Eleni. This is as colorful as Timket, however instead of water, the focus of the celebration is a bonfire topped with an image of a cross to which flowers are tied.

Priests in full ceremonial dress bless the bonfire before it is lit. This festival coincides with the mass blooming of the golden Yellow Maskal Daisies, called Adey Ababa in Amharic; symbolically heralding the advent of a new year after the rainy season is over.

This event, falling on the 7th of January, is celebrated seriously by a church service that goes on throughout the night, with people moving from one church to another.
Traditionally, young men play a game called Genna that is similar to the European hockey.

Religion playing such an important role in the Ethiopian society, festivals and ceremonies provide many high points in the calendar; only the Ethiopian Orthodox Church celebrates not less than 150 festivities per year.

The various ethnic groups have their own new years and other festivals and ceremonies, some unique to that culture while others are common to many.
The following are the most famous festivals common to most cultures. Nevertheless, although every festival has some features common to all, each ethnic group has its own version.

Commemorates the victory by Menelik II over Italy in 1896, 2 March